In this exhibition in San Atilano there is one detail that does not go unnoticed. Fortún peeks into one of the buildings. A bar, bar El Pozo. It’s a bar that really exists, like everything he paints. When I saw it and the woman standing at the bar, the name of the painter Edward Hopper and his work Nighthawks flashed into my mind. But this work was painted in 1942 in the USA. And now we are in the province of Zaragoza in 2004. The zinc of the painting melts into the zinc of the bar. The solitude of the metal blends into the solitude of the woman and of the pram. The light changes as you move around. The painting is not the same in bright daylight or beneath the fluorescent light of the ceiling or with the flashing lights of an ambulance passing by to pick up a patient. Then, all of a sudden, I remember that Nacho had two large posters by Hopper in his bedroom. But that was more than 10 years ago. And I think about how long a painting stays in the mind of the artist. Deeply touched, I think of the acids with which Fortun works the surface of the painting. What will they do in this case: outline the human contours or swallow their souls? What will the waiter charge for the coffee? Will the child be sleeping? Will the jukebox be playing? Will it be a gin and tonic the woman is drinking in silence? 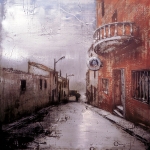 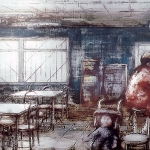