In the presence of light and the movement of the observer, his paintings and serigraphs on zinc and aluminium acquire a mirror quality which also responds to the chromatic filters (the cold or warm tones created by lighting). And here we return to the metamorphosis, to the reinvention of the landscape. Although in many cases the starting point was a photograph (as if it were an audition of images and the paintings were characters for whom the most suitable set had been sought), we sense and later confirm that the dreamlike lands will eventually prevail. This occurs in Bajo La Lona (Beneath the Canvas), where unexpectedly figures appear whose pale, ghostly faces lend the picture the feel of a contemplated nightmare, if this is possible.

(Roberto Sanches, part of the catalogue for the exhibition. The movable painting. Landscapes.) 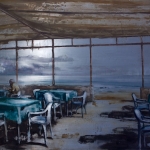 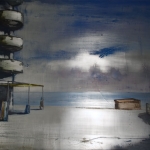 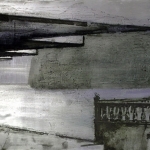 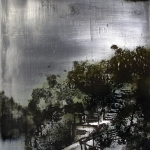 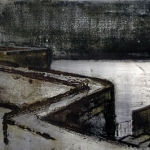 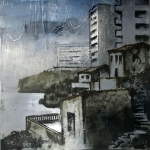 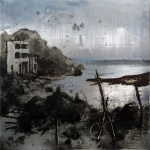 The graphic work on location.

Three representative works from the series Mediterráneo were shown in the exhibition The movable painting. With this title, the visitor is once again invited to watch the staging of the pictorial work, enabling him to discover the changing atmospheres of light in the landscapes, taking an active part in the variations of the light as he moves around the work. 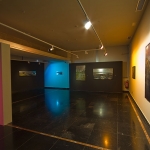 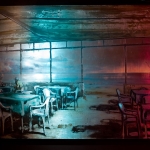 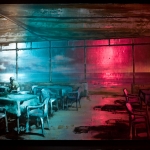 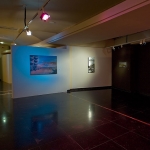